I’ll be the first to admit that I still feel like a new goat packer; complete newbie to this whole thing. We started our pack goat journey about 2 years ago. We rented a couple of big Saanens from Clay Zimmerman of High Uinta Pack Goats and took them to the Wind River Range. Immediately following that trip we began our plans to get our own herd.  So, fast forward 2 years, we now have five goats.  One is a 6 year old gentle giant, two are amazing Dwite Sharp Alpines that are 16 months old, and two barnyard bred yearling Oberhaslis.

Last summer we took our babies out on a couple isolated and remote overnights and had a great time.  Babies are easy.  Just bring their bottles and you’re good. This year it seemed like there could be a lot more drama on the trail and in camp.

We knew we wanted to access a couple of spots this summer that are known to always have high traffic at trail heads and access trails. Trying to prepare ourselves ahead of time we sought advice. We contacted some more experienced friends and packers and internet-goat-gurus. We asked about trail management and in-camp goat management.  Then we decided to go for it and give it trial by fire.  What I’m going to share with you are a few of the things that we did that worked, didn’t work, and hopefully save you from having to learn the hard way.

On our way in on a busy trail, we thought that everyone in our group should just grab a goat and move to the side when we needed to pass people. That did not work well at all since we had five goats, two adults, and two mini humans with us. Our goats kept wanting to follow everyone they saw and inevitably one would pull away from our kids and take off following random Joe Hiker

On the way out we took a different approach. We decided to put one adult in the front of the pack with a big stick, dog dazer, and pepper spray. With the other in the back we just hiked through hoping that everyone would yield to stock animals. It worked awesome.  We probably passed over a hundred people! Almost everyone would step to the side and allow us to pass easily. Except for the million questions and photos… I have one goat who was a little nervous passing people so I just kept his lead rope out and would lead him through the traffic with no problem.

Anyone we encountered with a dog (and there were a lot) we asked nicely to make sure they had a handle on them. We would then either take a route off the trail or ask them to step to the side. This depended on how hungry/mean the dog looked.. We only ran into one person with a dog off-leash and saw them far enough in advance we could ask them to grab their dog.  Maybe we just got lucky, but it seemed to work really well. After the first couple of groups our goats seemed to figure out what we wanted them to do. The pepper spray and big sticks made me feel much more confident defending my goats and my family in the event that things went south.

In camp I was really grateful for advice from people like Marc Warnke. He told us that you need to be a little patient while the goats figure out where they are and aren’t allowed.  They all wanted to nibble anything left unattended.  Bring several spray bottles and make sure to be consistent on where you allow your goats.  We set up our tent with a trio of trees behind it.  Then we just tossed some dead fall around the backside of the trees. This made the goats only able to approach our tent from the front.

We stored all the backpacks and whatever we needed to access quickly behind the tent, in front of the dead fall corral.  The goats quickly learned the “BACK” command. With a quick squirt they learned not to go near tents.  Same thing applied when we were preparing food.  “BACK” and a squirt.  Done deal. Another thing that worked well for us was the nighttime tie-outs.  We have struggled with low lines and high lines and goats getting tangled.  We were introduced to the “Orange Screw” at the NAPGA Rendezvous this year and thought we would try it.  The Orange Screw went easily into the ground.  The goats were given just enough space. They were near each other but couldn’t get tangled in each other’s leashes or dead fall.  On the collar end of the leash we attached a swivel clip. They were able to move around and not have their leash twist and tangle.   It was the most successful tie out to date.  Zero goat drama. Now if we could get everyone to agree on goats by the campfire, we’d be set! 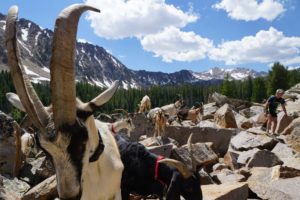 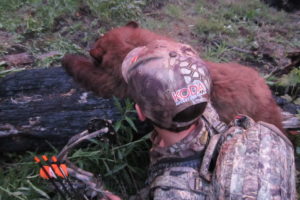 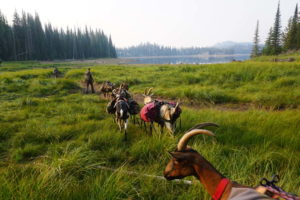